Just added to your cart

The History of Rubber Ducks A Symbol of Happiness and Freedom

As we could all do with some light distraction, here’s a brief history of our beloved bath-time buddy

The earliest version of a ‘rubber duck’ first appeared in the late 1800s, when American chemist Charles Goodyear (later of tyre fame) invented vulcanized rubber – that’s rubber hardened via a process of heating with sulphur, making it pliable, moldable and, most importantly, waterproof. Though, of course, the production of rubber toys wasn’t the original intended purpose of the process, they certainly turned out to be a happy bi-product!

The first ducks manufactured weren’t like the ducks we know today. For a start they were solid, weighty creatures which, unsurprisingly, didn’t float all that well (if at all!). In fact, the first rubber ducks were intended to be used a chew toys, for both babies and dogs alike, so you can imagine how unforgiving they might have been on tiny teeth!

It wasn’t until the 1930s that the rubber duck’s association with bath-time began to materialize as a way of luring reluctant children into the tub for a much-needed scrub! Around this time, two separate duck bath toy products were developed, the first born from the mind of an inventor from Maryland, and the other from an unlikely collaboration between the Walt Disney Company and a latex manufacturer.

As for Disney, their collaboration with Seiberling Latex Products in 1938 enabled them to create ‘bath floater’ toys, of which the most popular pair were of course Donald and Donna Duck. (N.B. A bit of Disney trivia for you all, Donna Duck was later renamed Daisy Duck, first appearing as Daisy in the film Mr. Duck Steps Out in 1940).

Images from Mr. Ganine’s patent for a toy duck, 1947, from the United States Patent and Trademark Office

Rubber ducks really hit the big time when in 1947, a sculptor called Peter Ganine filed a patent for a duck toy that he had created out of vinyl. Painted bright yellow and including their famous ‘squeaker’, the ducks were reproduced in thousands and sold across the world. Then, in 1970, their fame grew to new heights when the song ‘Rubber Duckie’ was featured on Sesame Street, sung by everyone’s favorite character Ernie. The song was such a hit that it even made it to number 11 in the Billboard Charts in 1971!

Since then, rubber ducks have been making bath-time play-time for children (and grown-ups) around the world. Along with the iconic yellow and orange design, variants now exist in their hundreds, from every color imaginable, to ducks masquerading as Romans and Vikings. The list goes on and on…

Rubber Ducks have become an international symbol of Freedom -

In 2016, a group calling for the impeachment of Brazilian President Dilma Rousseff began using rubber ducks as a mascot.

These rubber duck versions were seen during the 2017-2018 anti-corruption protests in Russia. There, among other demands, protesters called for the resignation of Vladimir Putin and his government.

Ducks also surfaced during a protest in Hong Kong last year, where protesters confronted police and carried these little plastic ducks and were photographed.

One of the iconic images of these protests in Hong Kong shows a battalion of police standing on one side of the road and a small yellow rubber duck resting on the ground in front. What happened in Thailand?

The social media platform was flooded with images of these inflatable rubber ducks from this week’s protest in Thailand. Some of these images show a deflated rubber duck dyed with purple dye that protesters said was projected from a water cannon fired by Thai police.

Thai youth quickly turned the yellow rubber duck into a symbol of protest by creating relevant artwork that can be purchased online. One poster shows that a rubber duck is a shirtless, muscular man, probably protecting a young protester from the hail of a bullet fired by Thai police. 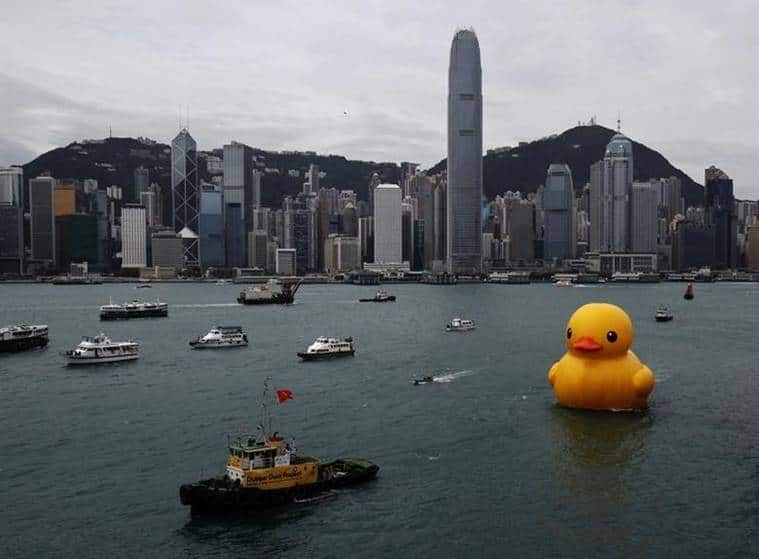 A rubber duck by Dutch conceptual artist Florentijn Hofman is being pulled by a tugboat at Victoria Harbor in Hong Kong, and the island skyline is approaching against the backdrop of May 2, 2013. (Reuters / Bobby Yip)

Florentijn Hofman once bought a large, laminated world map on which he indicated about twenty small, duck-shaped stickers where he wanted to present his rubber duck.

Some of those stickers have now been realized, but Hofman has not had enough and wants to send his rubber duck around the world until he is one hundred. - I hope someday Florentijn will consider brining it to Santa Barbara, CA.

So does a grown man make a mega rubber duck? According to an article in cultuurcocktail  'Because he is an artist. Because he has the guts and doesn't shy away from things. But mainly because I want to make things that trigger something, preferably together with others, in between the rippling of everyday life.'

I believe that the Rubber Duck means a lot of things to a lot of people. It represents both a combination of happiness, innocence and nostalgia for your youth.

Hofman wants to use his duck to contribute to the removal of global tensions. 'Whether you're a drain cleaner or a bank manager, you can easily connect with the work. You don't need artistic baggage for that', explains Hofman. 'I love that you can bring people together and they can talk to each other about everything that makes them tick - the work, how it's made, where it's located - without making them feel stupid . I think that's why it's a good project.'

All I know is that where ever the Rubber Duck goes, happiness and good things follow. Marco - Planet Duck.